Leave a comment
Note: PointsAway Classic provides access to our wealth of past reviews, updates, reader case studies, and more. Each article describes attributes of award programs – and methods to earn points and miles – that were accurate at time of publication. In most cases, things have changed over the years. You may also find some links and images are no longer available. Please verify any information important to you remains accurate through your own independent research. These articles are provided on a courtesy basis to provide inspiration, but should not be relied upon in making any important decisions.

Reader Lena has never flown in First Class. She’s been saving up her miles prodigiously and wants to go on a trip to remember with her husband, hopping from Los Angeles to Hong Kong, Tokyo and Singapore. Her timetable is flexible, looking to travel sometime next year.

Lena has a hefty stack of miles on hand. Between her own stockpile and her husband’s, they have 130,000 Ultimate Rewards points, 133,000 American AAdvantage miles, 50,000 Hyatt Gold Passport points and 50,000 British Airways Avios.

At first blush, this might seem like an easy objective to complete. After all, with six figures in two different programs and a solid 50k each in two others, how could this be hard? Unfortunately, this is one itinerary where stopover rules don’t work in our favor and the steep points expense of Upper Class redemptions for two people requires some creativity and quick booking. Let’s get started!

The Path from Ultimate Rewards

Our first step is to determine how we’d like to put Lena’s Ultimate Rewards points to use. We have a few options here, given that Ultimate Rewards allows 1:1 point transfers to United, Virgin Atlantic, Korean Air and British Airways.

Unfortunately, the fuel surcharges for long-haul award flights on British Airways makes them an impractical choice for the flights to and from Asia, so we’ll set them aside for now. Virgin Atlantic is named after the wrong ocean, in this case. A number of partner redemptions would be possible through them, but none at rates that are appealing. The same holds true for Korean Air, which charges 92,500 miles per person for one way trips in their Prestige class. This would eat up most of Lena’s 130,000 Ultimate Rewards points before even looking at a second ticket.

So, we turn back to United. As you probably know at this point, United’s award chart is changing on February 1, 2014. The biggest changes are coming to upper class redemptions on United partner airlines, though redemptions on United’s own fleet are going up, as well. As such, it’s important to book this award prior to February 1st, as we’re referencing the current award guidelines that will be in place until then!

For now, Saver-level Business Class award on United come in at 60,000 miles one way to Japan, while Saver-level First Class awards on United come in at 67,500 miles. Business Class tickets to Hong Kong would come in at the same level, while First Class tickets would be 70,000. These amounts uniformly apply regardless of if the flight is on United or one of its Star Alliance partners, which will change next February when Star Alliance redemptions detach from those purely on United flights.

First Class back from Hong Kong is only 67,500 miles on American, so it makes more sense to fly them back than United, leaving us with the basic outline of our itinerary.

However, this is one time when stopover rules don’t work to our advantage. Unfortunately, American only allows stopovers at North American gateway cities and United doesn’t allow stopovers at all on one-way itineraries. There simply aren’t enough miles and points to go around to fly both passengers roundtrip on United or American, so we’re forced to split the itinerary in two. That means no stopover opportunities for this itinerary.

Even if we make it from LA to Tokyo on United (or a partner) and Hong Kong to LA on American (or a partner), we still need a way to fit Singapore into the trip. That means finding a way from Tokyo to Singapore and another way from Singapore to Hong Kong.

Avios to the Rescue

Here, we can put Lena’s Avios to work. Flights from Tokyo to Singapore come in at 20,000 Avios per person, but don’t come saddled with the type of fuel surcharges seen on BA flights since this flight is operated through a partner airline. Unfortunately, this ticket would have to be in Economy, as the redemption amount jumps from 20,000 to 40,000 Avios per ticket to upgrade just to Business Class, and all the way up to 60,000 per person for First Class.

Taking a look at the award booking results that come up on British Airways’ website brings to our attention some happy news: the most direct flights to Singapore are on Oneworld partner Cathay Pacific, and require a connection in Hong Kong! According to Avios Booking Rule D.1.7, a stopover in Hong Kong should be no problem, since the stopover would be at a connecting point on the most direct route from Tokyo to Singapore.

Even if BA causes trouble over this, though, it’s a non-issue: flights from Tokyo to Hong Kong come in at 10,000 Avios, and flights from Hong Kong to Singapore also come in at 10,000 Avios. So, simply booking each leg separately can negate the issue, and also avoid the phone booking charge that would be necessary to schedule in the stopover as part of one 20,000 Avios redemption per person.

Because Lena is so flexible with her travel schedule, and because flight availability is generally quite good, we’re looking at this more as a sketch than a specific set of flights and dates. We know now that we want to fly United from Los Angeles to Tokyo. This will cost 120,000 United miles for Business Class or 135,000 United miles for First Class, since we’re looking for two passengers. When Lena submitted the itinerary, she was short of the 135,000 mark at 130,000, but I’m sure she can make up the difference if she absolutely wants to fly in First Class, based on spending she’s done since submitting her information and perhaps even spending a few bucks on a couple thousand United miles to put her account over the top if necessary.

However, this may not be the best strategy! United’s offering nonstop service on one of its new 787 Dreamliners from LAX, but this is a two-cabin plane, with their Business Class product being the flight’s highest redemption opportunity.

A better idea is to use these miles to fly First Class on ANA in their new ANA First Square product, which provides an aerial cubicle of comfort for the journey, well beyond the fairly spartan layout of Business Class on United’s 787 flight. The service for this flight looks to be truly out of this world, as evidenced in this comprehensive report over at FlyerGuide 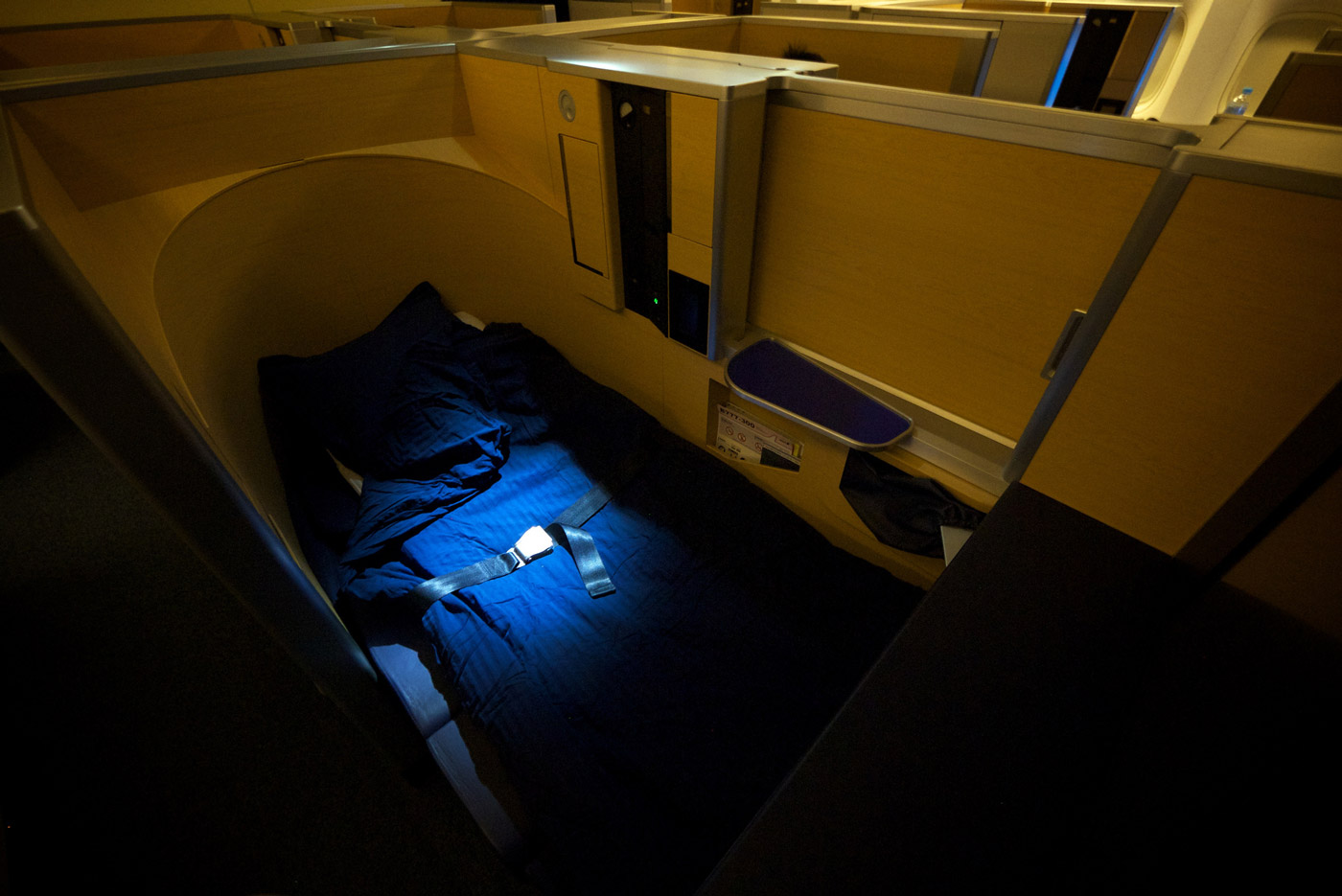 We’d recommend speaking with a United representative by phone in order to find availability for one of these flights, given the flexible travel schedule. It’s worth Lena conforming her travel dates to this service to really get the taste of First Class that this trip is all about!

Booking the Avios flights should be uneventful, with fair availability throughout the year in Economy. I’m sure it will feel like Lena is “roughing it” compared to the splendid service on the front and back ends of the trip. Even so, it’s probably worth it to Lena if she wants to keep her cost as low as possible. Despite the redemption, there are still $54.80 in taxes and fees for the flight to Hong Kong. Compared to tickets that at the low end come in at $292 and require a connection, this is a fair redemption at roughly 2.4¢ per point in value.

From Hong Kong to Singapore, we found cash flights as low as $124 per person, while Avios redemptions would come in at $89.76 plus 10,000 points per person. As such, we’d recommend booking this segment as a cash fare rather than using the Avios for it. Better to keep them for another day than waste them at about 3/10 of a cent each.

Flying home from Singapore, we’d recommend shooting for Japan Airlines, connecting in Tokyo. More direct options might be possible, but they would miss out on JAL’s SKY SUITE product, which appears just as impressive as ANA’s First Square! 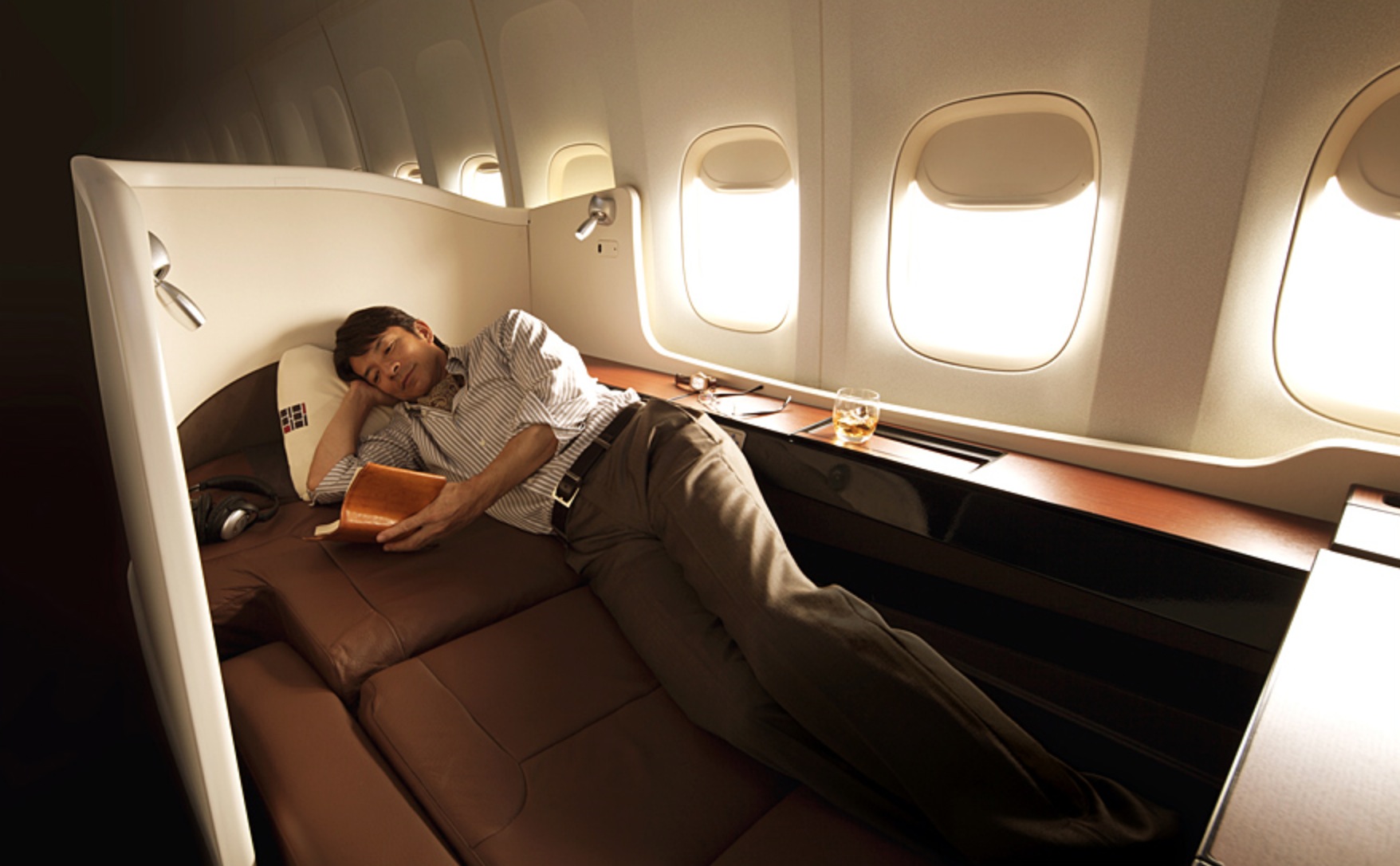 Again, this is a flight worth planning around, so we recommend speaking with an American agent in order to ensure a flight on one of JAL’s new 777s with Sky Suites is possible. At just 67,500 miles, this redemption in particular feels like a steal.

This is a big trip that uses up a lot of miles. Redemptions like this aren’t for everyone. I myself have a hard time contemplating parting with 145,000 combined miles per person for a single trip. However, the value of this redemption is borderline ridiculous.

It’s difficult to arrive at an exact figure to compare to without knowing exact travel dates, but I did my best to be fair and search for below-average fares for each step of the journey. Excluding the Hong Kong to Singapore flight, which I recommended using cash to book, the other three flights require 145,000 miles and approximately $253.80 in taxes/fees. The total amount of the trip per person if these three award flights were booked in cash is in the neighborhood of $15,835[/highlight. Each.

That means the total redemption is worth roughly 10.9¢ per point. Since we define 2¢ per point or higher as victory, this is an incredible deal, indeed!