Leave a comment
Note: PointsAway Classic provides access to our wealth of past reviews, updates, reader case studies, and more. Each article describes attributes of award programs – and methods to earn points and miles – that were accurate at time of publication. In most cases, things have changed over the years. You may also find some links and images are no longer available. Please verify any information important to you remains accurate through your own independent research. These articles are provided on a courtesy basis to provide inspiration, but should not be relied upon in making any important decisions.

The Most Delicious Secret at LAS

Though Gold Spike is giving it a run for its money, the Centurion Lounge remains one of my favorite places in Las Vegas, and it’s one you can visit before even leaving the airport.

Operated by American Express, the Centurion Lounge elevates the airport lounge concept to a level of quality worthy of the city. With three meals a day designed by renowned chef Scott Conant, founder of the Scarpetta restaurants, and an outstanding list of wines and cocktails managed by James Beard Award-winning mixologist Jim Meehan, the Centurion Lounge’s food and drink offerings rival what’s seen at all but the finest restaurants on the Strip. Best of all, all food and drinks are complimentary upon admission.

On my first visit to the Centurion Lounge, I enjoyed an exquisitely prepared beef short ribs enough to go back for seconds. 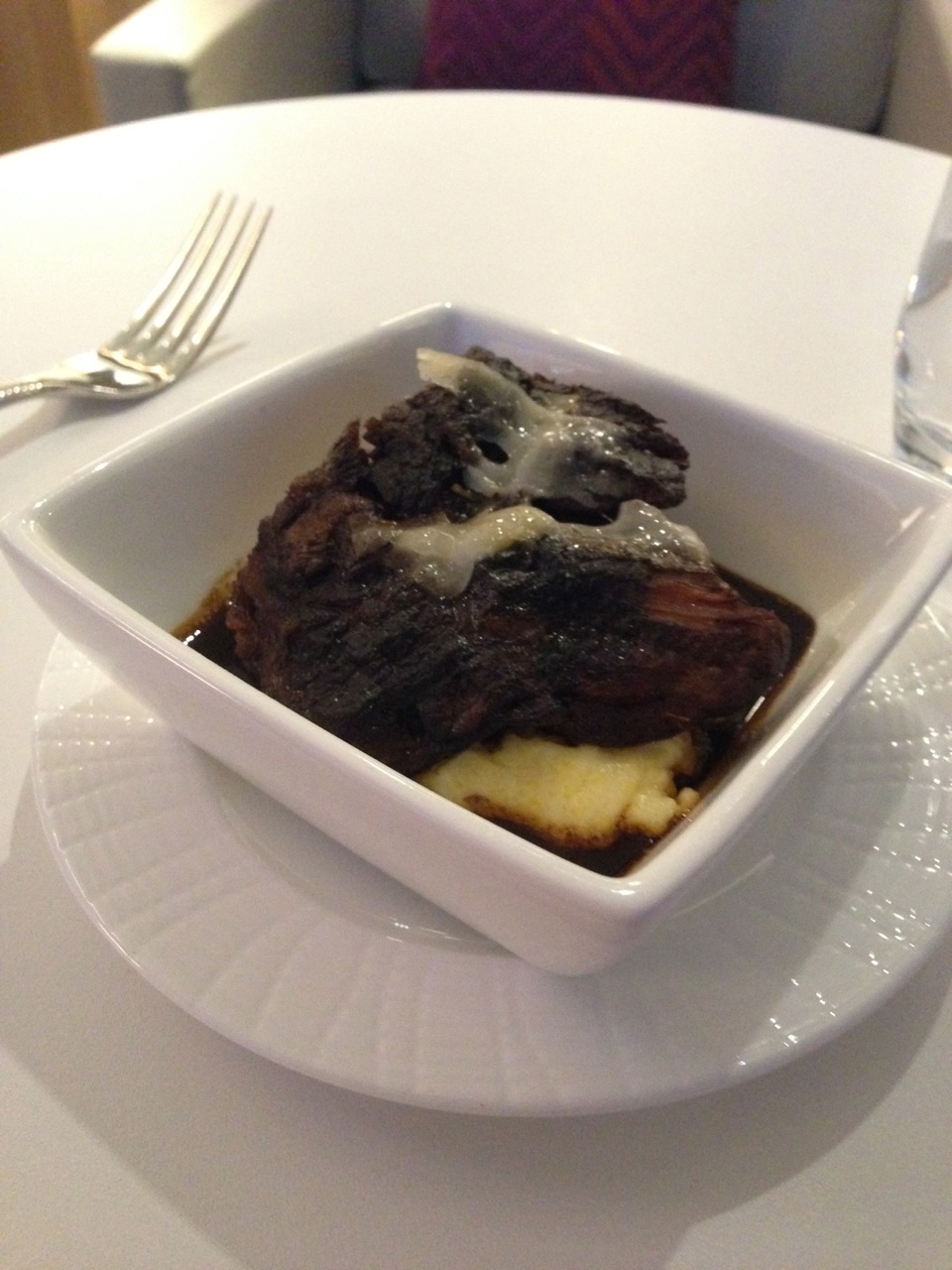 Among the Lounge’s cocktails, the Vesper stands out, as a faithful recreation of James Bond’s drink of choice. 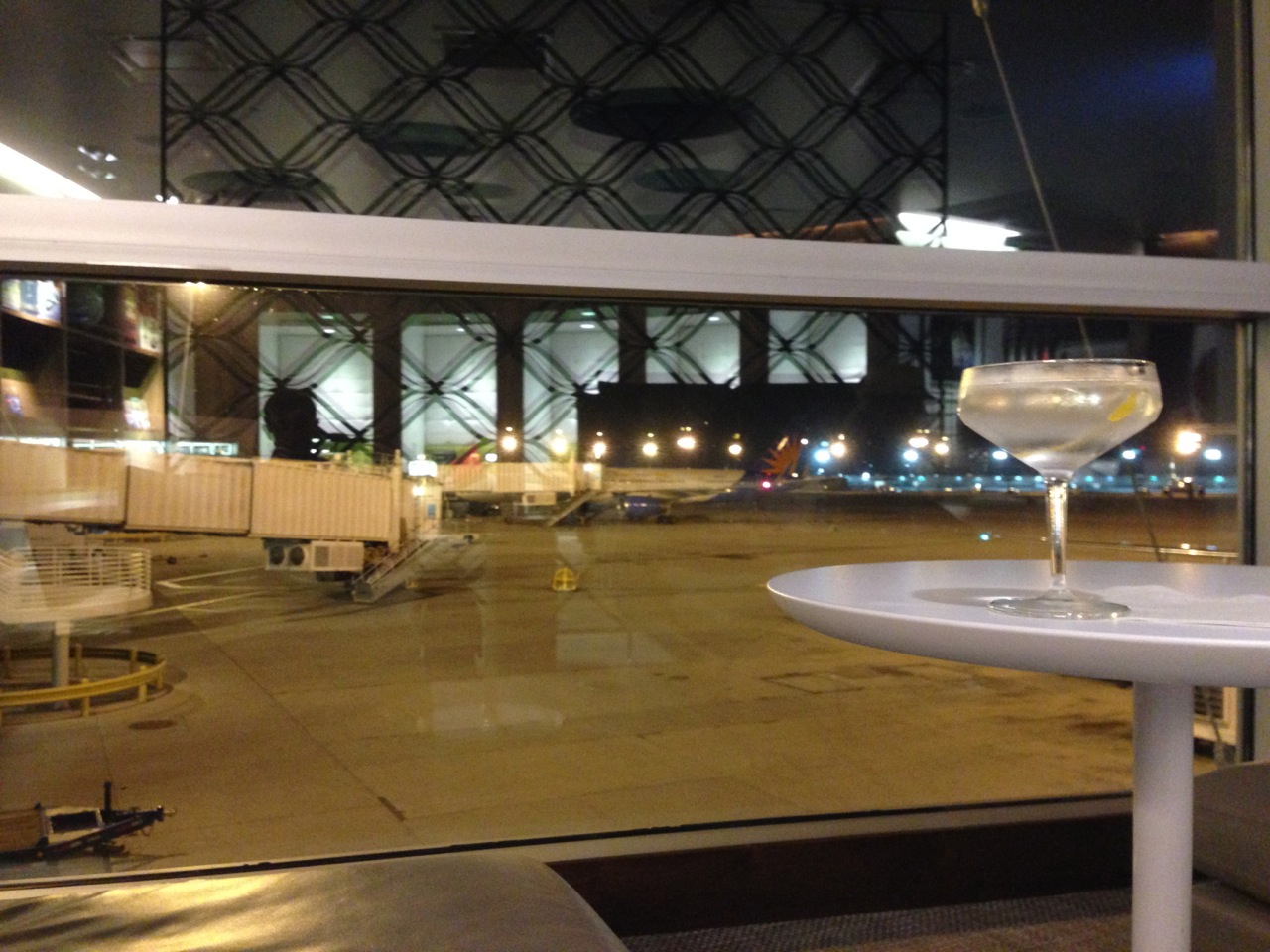 More recently, the Lounge’s brioche French Toast and fresh strawberries made waking up extra early to ensure a stop before a departure well worthwhile. 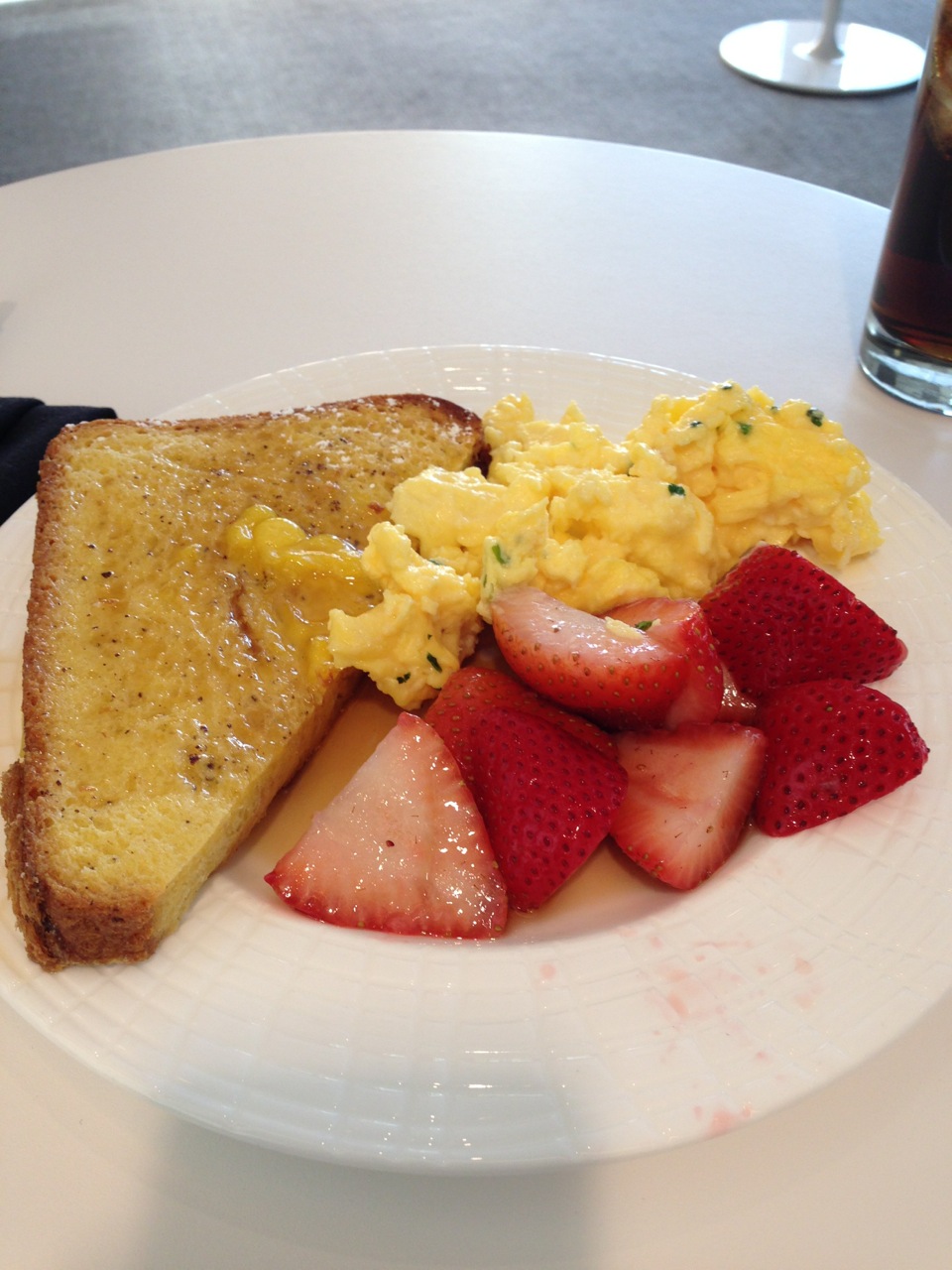 The menu changes regularly as Centurion Lounge’s executive chef creates new options that ensure the menu never loses its luster with the Lounge’s more regular guests. Impressive in an era still paranoid about airport security, actual, honest-to-God silverware is on hand, so you won’t need to worry about breaking a plastic spork in what would otherwise be a great meal.

Enough About the Food!

That I’ve gotten this far without mentioning the design and amenities of the Lounge itself would be a crime if the food weren’t so worth discussing. Centurion Lounge blows away the aesthetic of a standard airport lounge with a design scheme firmly rooted in the highest peak of the Jet Age. 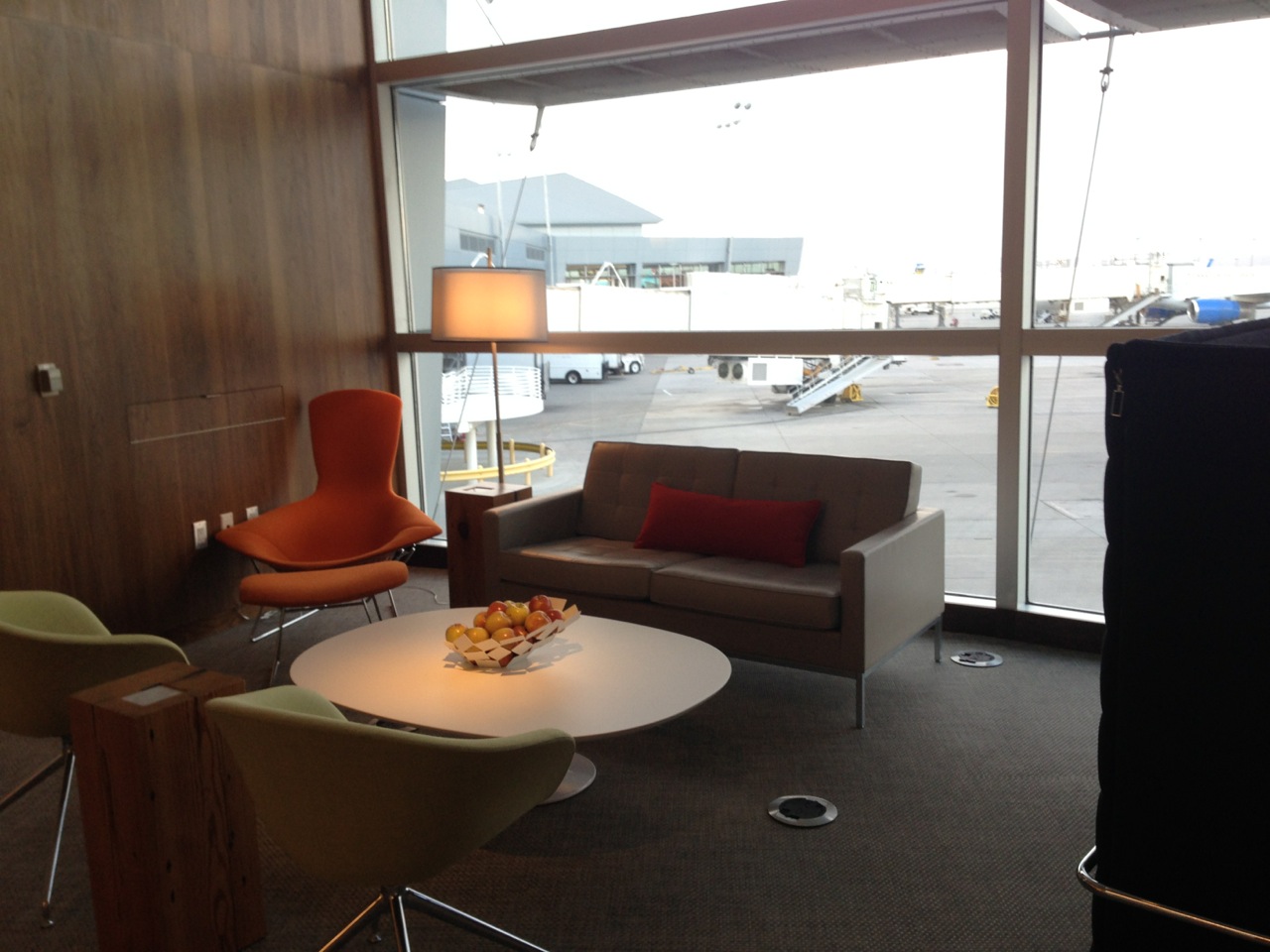 The Mad Men-era look brings an undeniable cool to the space, which is accentuated by the work of renowned photographers that adorns the walls. Personal favorites include Sean Connery staring at a slot machine inquisitively while filming Diamonds Are Forever and a portrait of an older Sammy Davis Jr. All the art is available for purchase, presumably by using your American Express card.

Additionally, a Member Services desk resides near the front of the Lounge, ready to help cardholders with any number of needs from local transportation to concierge or emergency services. A playroom for kids includes an Xbox 360 and a well-stocked game library. A board room table straight out of Sterling Cooper rests near the back of the Lounge, along with a few computers and printers, perfect for a meeting or to catch up on some work between flights. The Lounge’s Wi-Fi is fast, too, so internet access won’t be an impediment to getting work done. 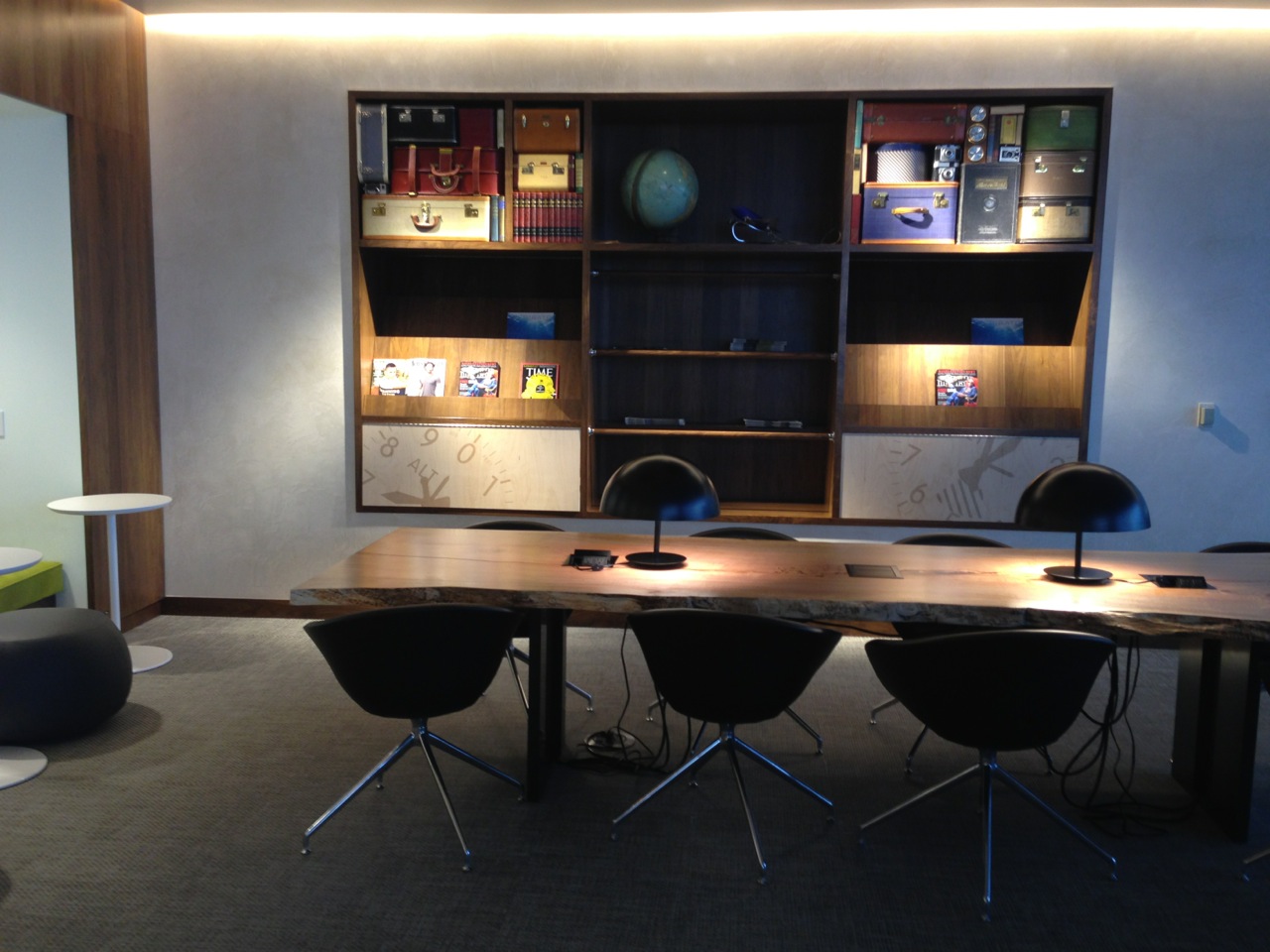 Various nooks and crannies include cushions for seating, and chaise lounges are comfortable enough to sneak in a quick nap. Large HDTVs – with HD feeds, not that stretched standard-def nonsense so often seen at airports – line the walls at intervals far enough away to not be distracting while near enough to be visible from most anywhere you’d like to sit. Tall windows provide a great view of the taxiway at the airport, perfect for watching planes arrive and depart. 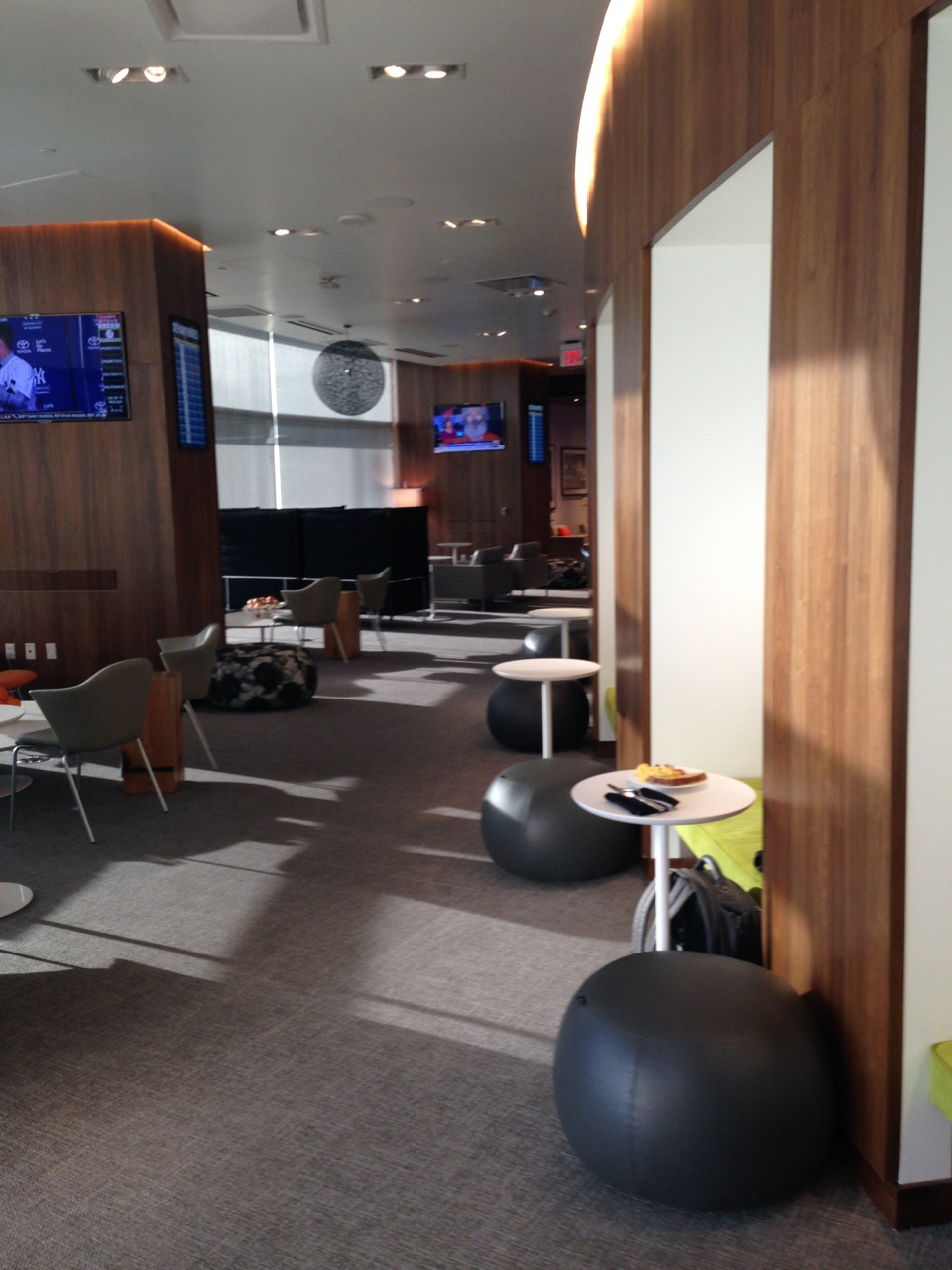 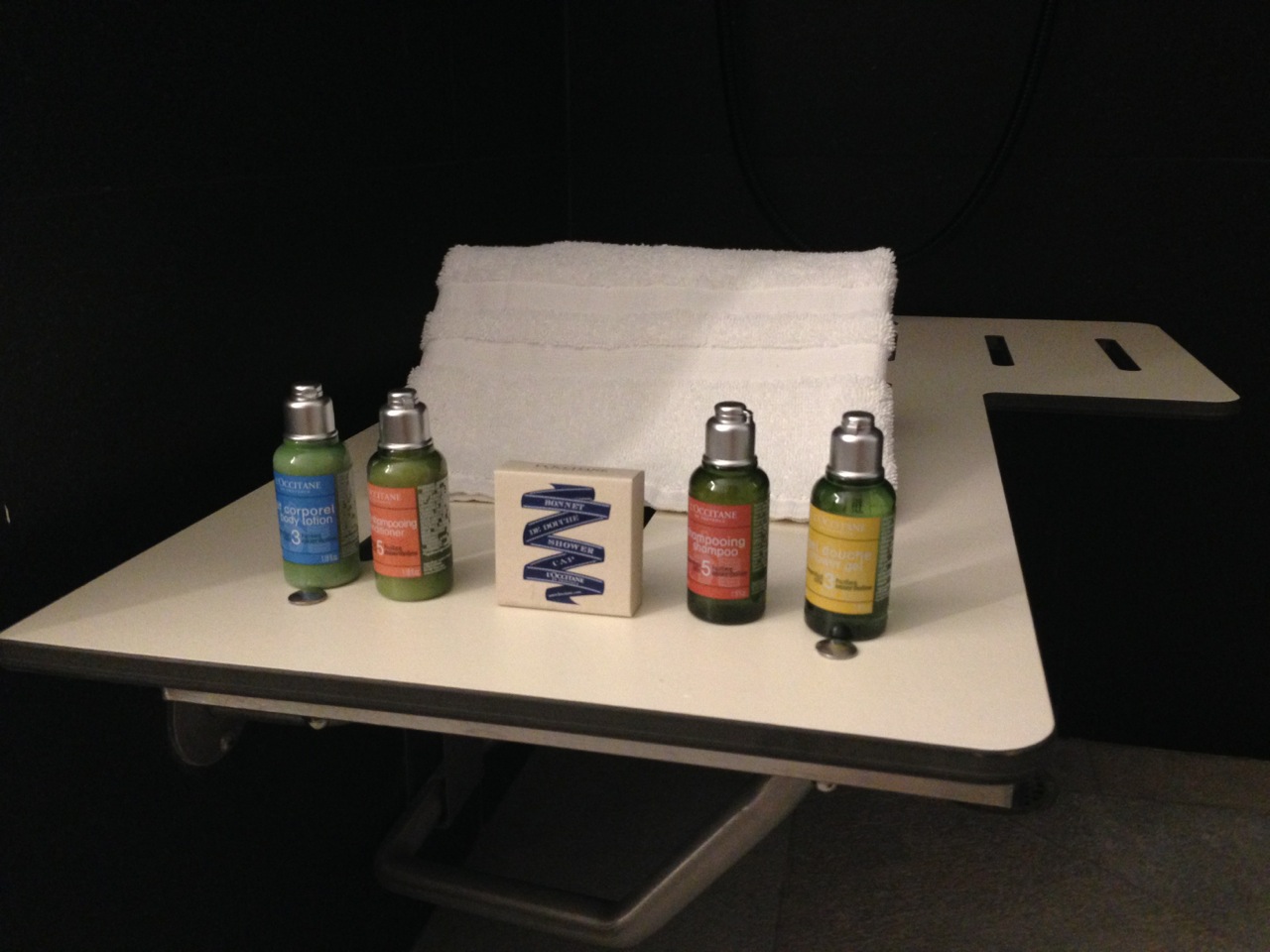 This provided an extremely appreciated opportunity to refresh one day this Summer when I had an early morning checkout but explored the Strip all day prior to a redeye flight.

How to Get In

Cardholders are occasionally targeted by American Express for complimentary entry to the Lounge. As a Gold Delta SkyMiles American Express cardholder, I received an invitation good for up to five entries before the end of 2013 early this Spring, prior to the opening of the Lounge.

I’ll be sad to see my extra days expire at the end of the year, but will be happy to fork over the $50 fee for a day pass whenever I’m spending more than an hour at McCarron in the future. Platinum and Centurion cardholders receive complimentary entry, which gives me another reason to consider upgrading in the future.

While the Las Vegas location was the first foray into the Centurion Lounge concept by American Express, the company’s plans for expansion are aggressive. Already, a second location at DFW (Dallas Fort-Worth) has opened, and plans are already in place for locations at LGA in New York City and SFO in San Francisco, with more to follow behind.

Especially given the end of American Express’s partnership with American due to the protestations of American Airlines credit card operator Citi, it appears that Centurion Lounge will serve as Amex’s way to not merely meet but exceed past offerings by going their own way at many airports.

Should you find yourself in Las Vegas or Dallas Fort-Worth for any amount of time, I can’t recommend Centurion Lounge highly enough. I normally prefer to save money by forgoing lounge access prior to flights or during long layovers, but wouldn’t hesitate to pay Centurion Lounge’s rate, given its exceptional food and drink offerings and the sense of cool and comfort it exudes. Centurion Lounge is the best expression of the idealized golden age of flight, brought to life with every useful modern touch. 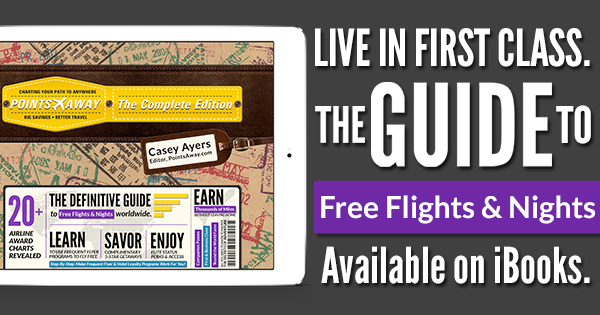