You are here HomeFootballHyattJaguarsJetBlueNew York CityNorth AmericaHow I’m Going To The NFL Draft For $2.50 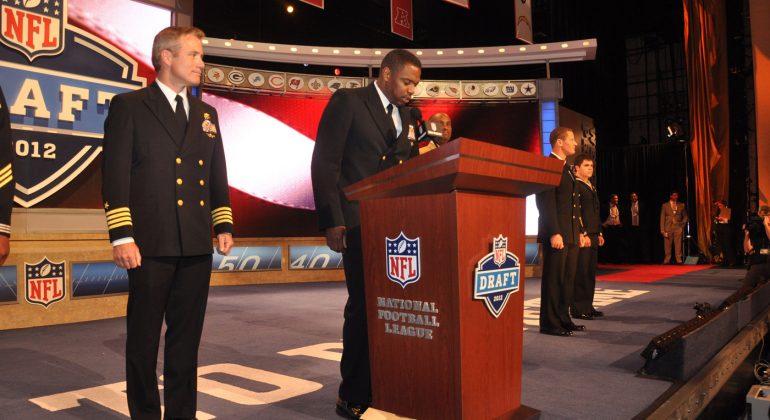 Leave a comment
Note: PointsAway Classic provides access to our wealth of past reviews, updates, reader case studies, and more. Each article describes attributes of award programs – and methods to earn points and miles – that were accurate at time of publication. In most cases, things have changed over the years. You may also find some links and images are no longer available. Please verify any information important to you remains accurate through your own independent research. These articles are provided on a courtesy basis to provide inspiration, but should not be relied upon in making any important decisions.
Image courtesy: US Navy

Today, I’m on a plane heading up to New York City for the NFL Draft at Radio City Music Hall, along with 100 of my closest friends from here in Jacksonville.

We’ll all be equally excited when some great player’s name is called for the Jaguars on Thursday night, but I’ll have gotten there and back a little more affordably than most of them. Bar tab, merchandise, souvenirs and ground transport aside, my flight and hotel expenses should come in at a grand total of $2.50. Here’s how:

Flight plans home are scattered; some folks are staying longer than others, or heading off to other destinations after their time in New York. Just about everyone heading to the Draft from Jacksonville, however, was planning to be on the exact same flight: Air Duval, as it became known, a 6AM direct jump from JAX to JFK on JetBlue.

I like JetBlue. Seat-back TVs, a tremendous amount of legroom and good snacks are but a few of the features that make the airline a popular choice. What I like even more is that TrueBlue, their frequent flyer program, is a transfer partner of American Express Membership Rewards.

I was on the fence for quite some time about going to the Draft, but when seats on Air Duval dipped to $99, I finally bit. I didn’t keep track of the precise number of points I had to use, unfortunately, but it wasn’t high. JetBlue’s program doesn’t follow a strict formula the way Southwest’s does, but the number of points needed for any flight rises and falls based on the cash cost of a seat.

As such, when the cash price dipped, so did the points cost for the seat, down to just a handful of points easily transferred instantly into JetBlue’s program. That left me with just the $2.50 security fee to pay for this flight. As luck would have it, that would also be the last $2.50 I’d need.

I have a ridiculous confession to make: I’ve never actually been to New York City. Sure, I’ve flown through the city and it’s many airports on multiple occasions, But I’ve never actually spent time on the ground. I wanted to do this trip right, that only to celebrate my first time going to be a metal draft, but also to celebrate my first time in New York. Thankfully, I had just the ticket: I’d taken part in a Diamond Status Trial with Hyatt the year before.

As part of that free Diamond Trial, which we show you how to sign up for in the PointsAway book, I not only was able to enjoy top-tier elite status privileges for several months but was also awarded four suite upgrade certificates. While I didn’t complete the trial successfully at the time, these suite upgrades remained in my account, good through February of this year. The suite certificates could be applied to stays set to take place even after they expired, so I wanted to use one for this trip.

Suite upgrade certificates with Hyatt can only be applied to paid bookings, but Points + Cash bookings count as paid for upgrade purposes. That meant I could still pay a fixed cash copay and a fixed number of points for a room that might otherwise be quite expensive, then apply the suite upgrade to move to a far more valuable room, so long as space was available.

As a Category 6 property, the Grand Hyatt New York typically requires 25,000 points per night. Under the Points + Cash program, just 12,500 points + $150 per night could also get the job done.

The hotel is very well-located, in close proximity to not only Radio City Music Hall – the home of the NFL Draft – but also plenty of other sightseeing opportunities. I spoke to Hyatt and found out that the Grand Hyatt had both Points + Cash rooms and suite upgrade space open during the Draft. Suite upgrades only bump you up to the lowest level of suite available, but just one is needed for the duration of your stay, even if you stay several nights.

In the case of the Grand Hyatt, this meant moving up to a Junior Suite, which is still vastly larger than most New York City hotel rooms, including a capacious seating area and breakfast nook: 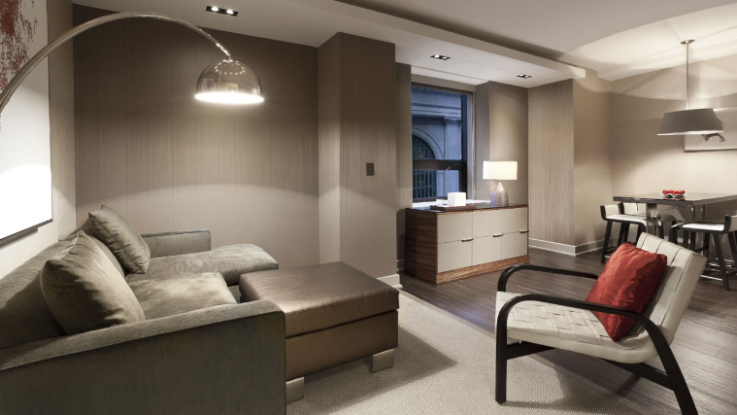 I made a deal with two friends of mine: if they could cover the cash copay, I would front the extra points and suite certificate so we could share the room during the Draft. This meant much less out of pocket for all of us than a cash room would have required, plus the extra cache of having a suite in the heart of New York for the Draft.

They agreed, and I moved over the 37,500 Ultimate Rewards points needed to cover the room to my Hyatt account while I still had the Hyatt rep on the phone. The points transferred instantly and the room was booked.

The cash price for a standard room would have already been in excess of $300 per night, but the cash rate for a suite skyrocketed to over $572 per night! By using the Points + Cash option, this cost was reduced from a total of $1,716.83 for three nights to just $526.88, a savings of about $1,200. That works out to 3.2¢ per point in value for the points used, which is a solid redemption.

Now, all I needed was a flight home.

JetBlue’s flight schedule didn’t line up for me well for the flight home. I wanted to stay through Saturday evening in order to hopefully catch a show or more of the draft, maximizing my day in New York before returning home. The best option for this was a flight on Delta direct from JFK to JAX for just $110.

I decided to book this through Ultimate Rewards, though instead of transferring points to another program, this time I booked it using points as I would cash.

That meant parting with 8,800 points, less than the 12,500 SkyMiles Delta would have charged for the same flight and roughly in line with the number of JetBlue points an earlier flight would have required.

There’s no separate security fee or any cash cost on this type of redemption, since you’re effectively “paying” for a cash ticket, just by using points instead of dollars. Flights booked through the Ultimate Rewards booking engine are cash bookings, to the eyes of the airline, meaning I’ll earn SkyMiles for the flight. Further, flying home on Delta meant an opportunity to check out their new Sky Club at JFK, which should be a fun stop before heading home.

I’ll check back in next week with an update on how the trip went and a review of the room. In the meantime, I’m still excited about how much I was able to save in booking this trip.

Objectively speaking, this trip could have been accomplished without spending much: the flights were cheap, and a more modest hotel could have probably been found for less than the asking price of the suite we’ll have. There’s plenty to argue with in the breakdown below accordingly, but I did my best to lay it out plainly so you can arrive at your own savings estimate.

I’m not sure if I would’ve sprung for the trip even at a lower cost; it would’ve seemed like too much of a luxury when I was trying to be particularly financially cautious. Effective use of points not only put the trip in reach, but allowed it to take on a unique flair worthy of the occasion.

After all, it’s not every year you come home from New York with a franchise quarterback. 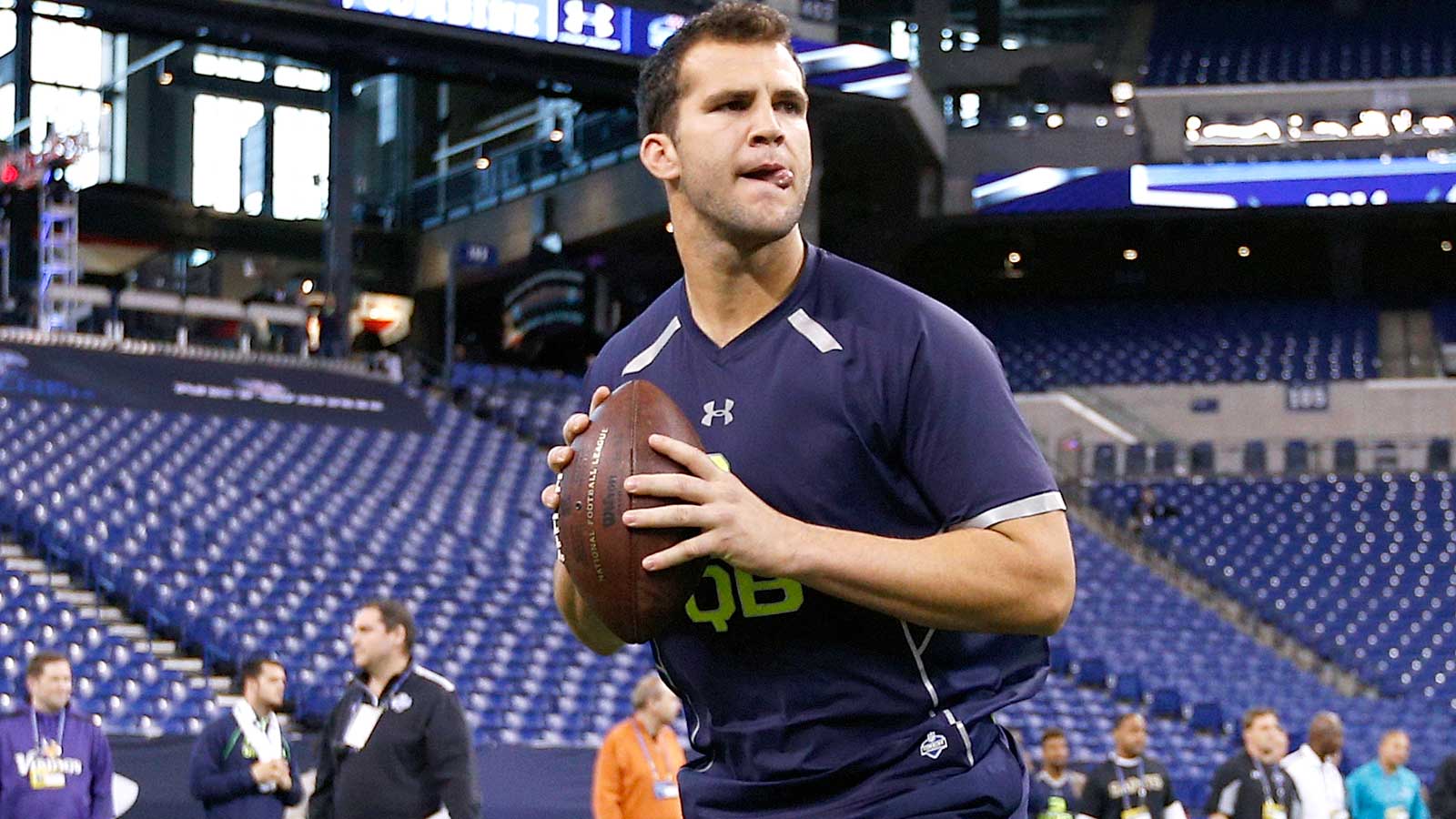 Every Friday, we send one email filled with: 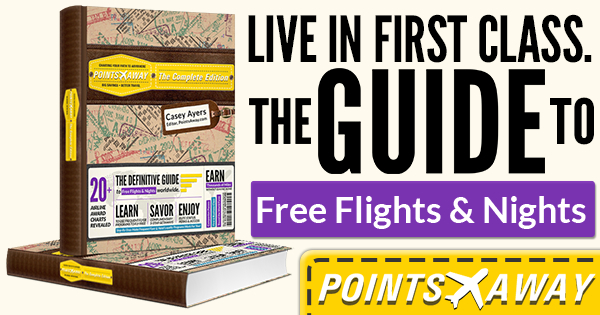